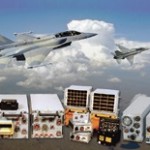 This award supports foreign military sales for Morocco, Egypt and Iraq. Work will be performed at Goleta, CA, and is expected to be completed March 2017, according to a Raytheon news release.

Built on a legacy of EW suites for the F-16 platform, including Raytheon’s Advanced Self-Protection Integrated Suite (ASPIS and ASPIS II), ACES reflects the next generation of advanced EW for the F-16. Legacy efforts and core elements of ACES have proved highly effective against real threats in acceptance flight trials, combat exercises and spontaneous defense of sovereign territory.